Thousand for All: Celebrating Open Streets 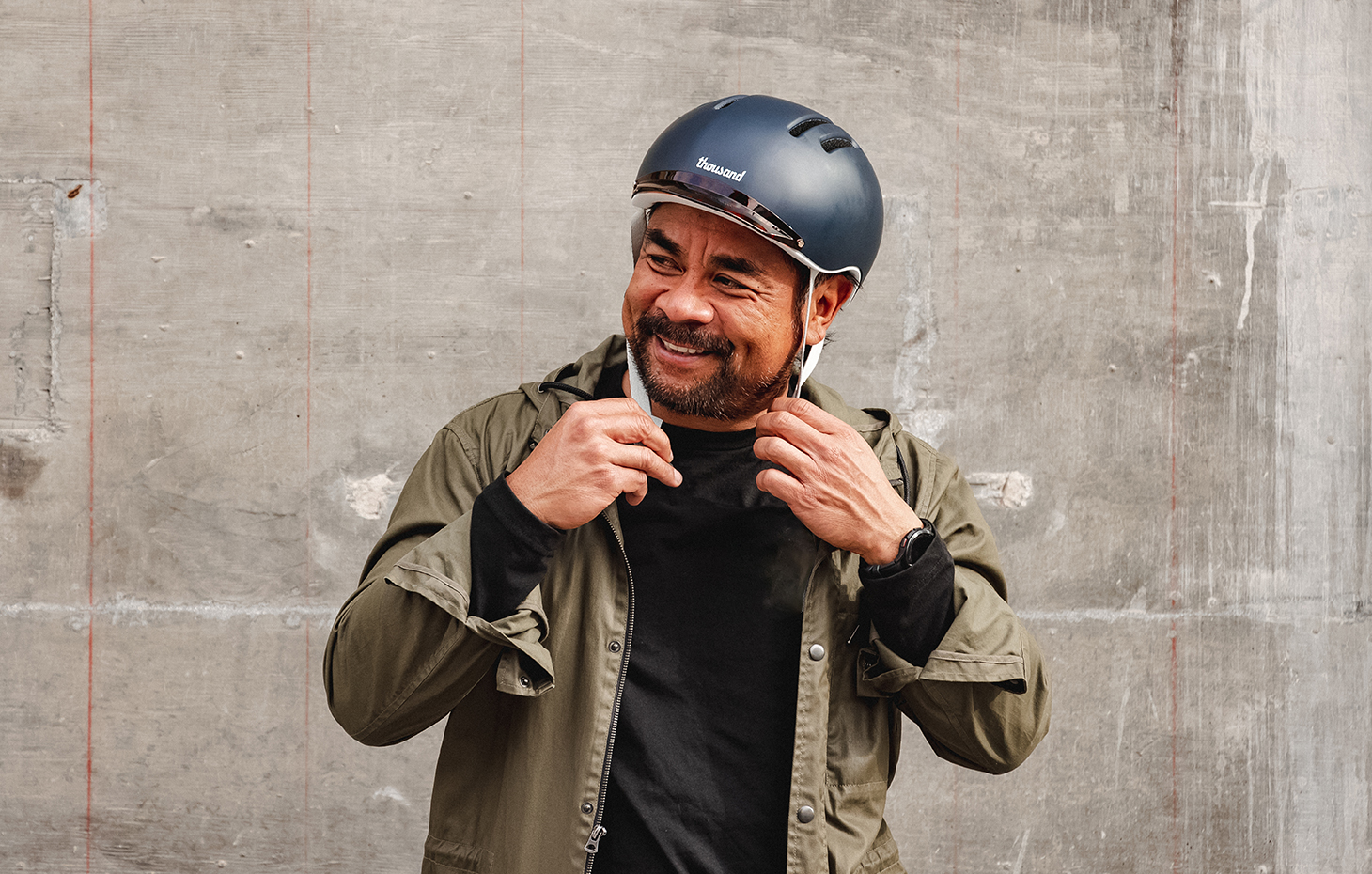 From riding his bike along the river paths by his childhood home to organizing the largest open streets event in the United States, Romel Pascual’s love for cycling and for cities has been lifelong. Today, he is a vital voice in the city of Los Angeles advocating for urban mobility and accessibility as the Executive Director of CicLAvia. We spent a chilly morning in the Arts District with Romel to learn more about his rich career in urban planning and environmental advocacy, as well as how his nonprofit is instilling hope during a global pandemic. 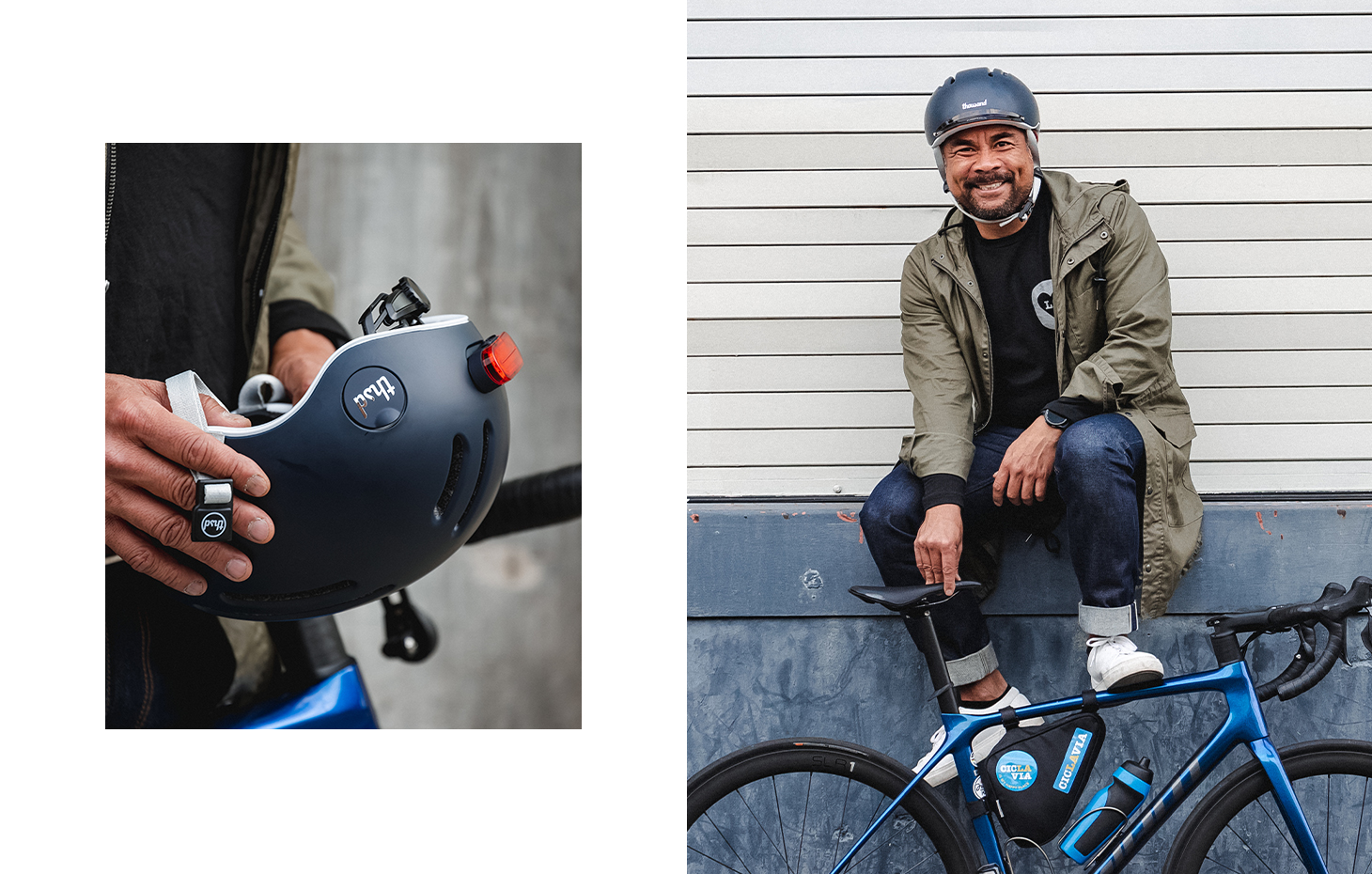 Romel is wearing our Chapter Collection helmet in Club Navy. Shop his look..

THOUSAND: Tell us about yourself.

Romel Pascual: I’m an urban planner by training, and I’ve been fascinated with cities and urban spaces for as long as I can remember. I would ride my bike along the concrete river paths near my house, carefully navigating down the inclined concrete river base. I’d pass houses, see industrial areas, and see horses in people’s backyards. Then I’d make it back home at some point.

Today, I continue to stay active, which is a very important part of my daily life. Whether it’s riding my bike, playing tennis (which I started playing at 7 years old, and was something I used to do competitively) or just working out, being active keeps me in balance.

When I look back, it makes sense that I took the career path that I did. I spent most of my career in the environmental justice and sustainability areas. My first full time job was working at an environmental justice organization in the Bay Area doing community organizing and advocacy work. It was about building community-based leadership and being part of the decision-making process on issues that affect communities.

More recently, before coming to CicLAvia, I served as LA’s Deputy Mayor for Energy and Environment under the Villaraigosa administration, and prior to that, I worked at the State and Federal level – serving as California’s first Assistant Secretary for Environmental Justice, and at the national level, leading EPA Region 9’s Environmental Justice Program.

T: When and why did you get involved with CicLAvia?

RP: I became aware of CicLAvia in 2009 when a group of what would be CicLAvia founders came to meet with me and my colleagues when I was in the Mayor’s office. The group included some people who had experienced the Ciclovia in Bogota, Colombia, and had the wonderful vision to bring car free streets to LA.

The group had been meeting and planning for several months already and like many things about closing streets in LA, you need some level of partnership with the City. And to make a long story short, we (the Mayor’s Office) said yes to the partnership and to working with CicLAvia to bring the first CicLAvia to LA on 10/10/10. As Deputy Mayor, I was an advocate and lead in City Hall for making CicLAvia happen.

To be honest, given that this would be the first car-free open streets event in LA, I didn’t know what to expect at the first CicLAvia on 10/10/10. I knew that so many people, both at CicLAvia and in the city departments worked very hard leading up to 10/10/10.

But on that October morning, there was something quite remarkable happening. On the nearly eight miles of car-free streets, you can feel and hear the city in ways that I’ve not experienced. You saw 100,000 smiles, you heard joyful conversation and lots of people laughing, you heard ‘hellos’ and ‘how’s it going’ and ‘what a great day it is’. For the first time, you were physically aware about being in the middle of the major streets and experiencing the city in different ways. It felt like our imaginations opened – about the possibilities of how we engage with our built and social environments.

A few years later, after my tenure as Deputy Mayor, I joined the board and subsequently became CicLAvia’s Executive Director.

Ciclavia is about connecting people in the community and celebrating the diversity that makes our city a special place. It's about creating scaled belonging in a way that is safe, active and imaginativeIt’s a new narrative that is people-centric that amplifies culture in our communities and neighborhoods, and it’s where people are happy to be in traffic on the streets of LA because they are using  people-powered modes of transportation (bikes, skateboards, skates, strollers, wheelchairs, and by foot). 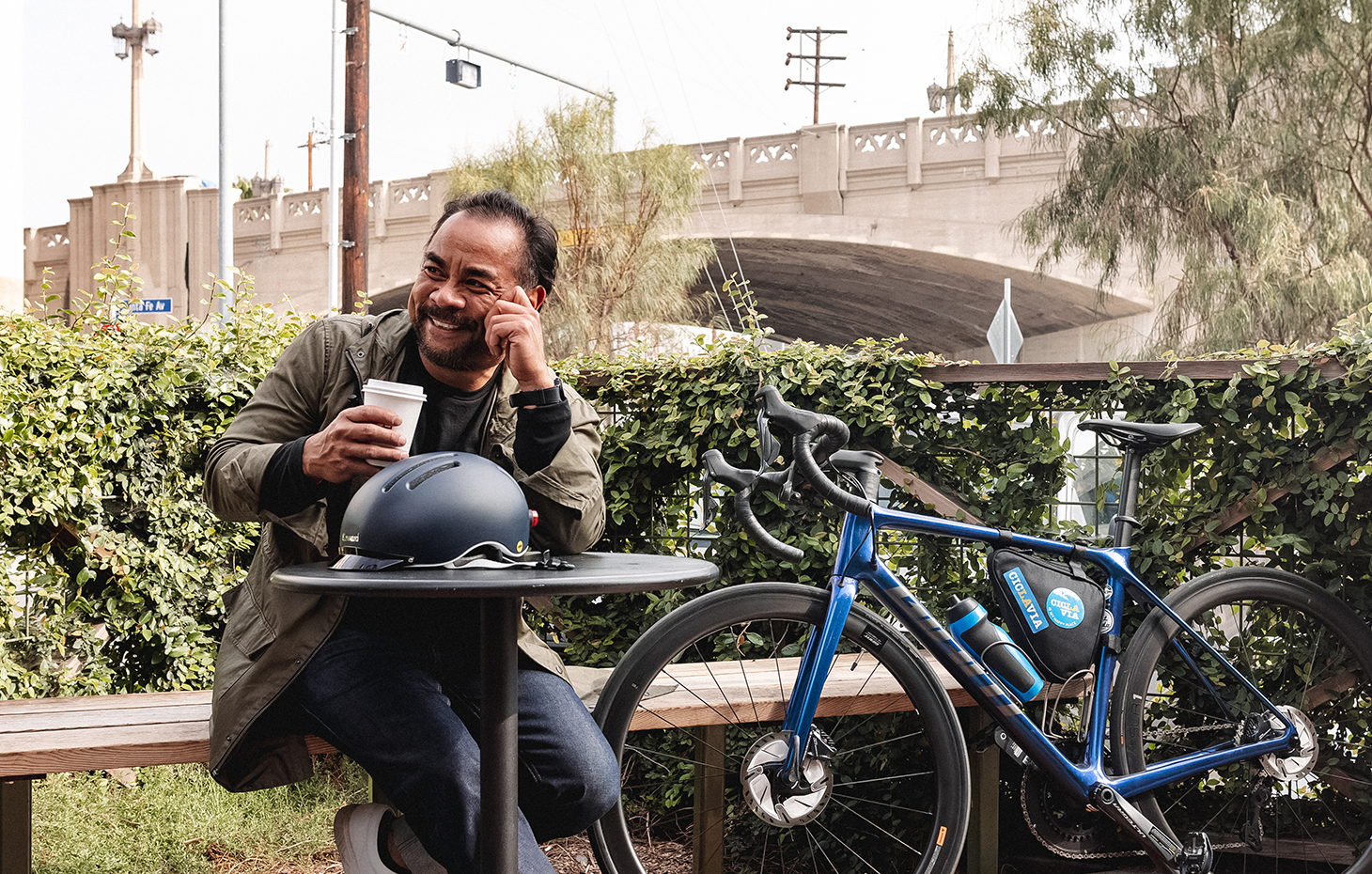 T: How can our community support CicLAvia?

RP: CicLAvia is a non-profit organization, and we are able to do what we do because of the support and contributions of the city, Metro, individual donors, foundations, and sponsors. To produce a CicLAvia takes a lot of resources - both financially and people power.

We have the best staff, board, and volunteers an organization can ask for. We work hard and long to produce multiple CicLAvia events in a calendar year. We are so fortunate to have community support at each CicLAvia when we see the tens of thousands of people – from all walks of life – enjoying themselves and connecting with each other.

We encourage folks to bring their friends and family to the next CicLAvia, especially if they’ve not experienced one before.  And we invite folks who love and support CicLAvia to be monthly supporters of CicLAvia. It can be as little as the price of a cup of coffee per month.

T: What do you think is the future of urban mobility?

RP: LA is a very innovative city, where we are seeing more and more resources and infrastructure built to support multimodal mobility. Yet, we continue to be defined by the single passenger automobile, and we see that every day as we sit in traffic.

But over the past decade or so, we’ve seen the appetite grow for more choices in how we get around. We passed Measure M and R to dramatically improve our public transit system over the next few years; we’ve seen more bike lanes created (though we need so much more); and we’ve seen the growth of micro-mobility.

There’s a foundation that’s being laid for a mode shift. I believe that we will get there with a more fluid way of moving around our city with more choices available to us. We just have to be open to using them. And we have to find ways to ensure that when we use our streets for things other than cars, we need to feel safe doing so.

While many may think our city’s transportation identity is solely the automobile, I believe, every time I attend a CicLAvia or walk/bike in our vibrant and diverse communities, our mobility rhythm is ever evolving.

The more choices we provide, the more opportunities for behavior change we encourage, the less reliant we become to the single passenger automobile as our main mode of transportation.

T: How has CicLAvia changed in a “post-pandemic” world?

RP:After we finished the February 2020 CicLAvia in South LA, the world changed and we had to make a decision to postpone the April 2020 CicLAvia because of the pandemic. And we didn’t get back on the ground until August 2021 with CicLAvia in Wilmington. That was about 18 months between events – the longest gap between events we’ve ever had since we started in 2010.

The pandemic has made us even more dedicated to growing CicLAvia in a post-pandemic world.

In late summer 2021, as the pandemic began to wane, Angelenos were eager to return to some of the enjoyable activities and routines they’d been missing for the past year, while maintaining the side benefits the pandemic brought like slower streets and cleaner air. CicLAvia was in a remarkable position to offer hope and instill social confidence and restore comfort to the community as we came out of the pandemic. 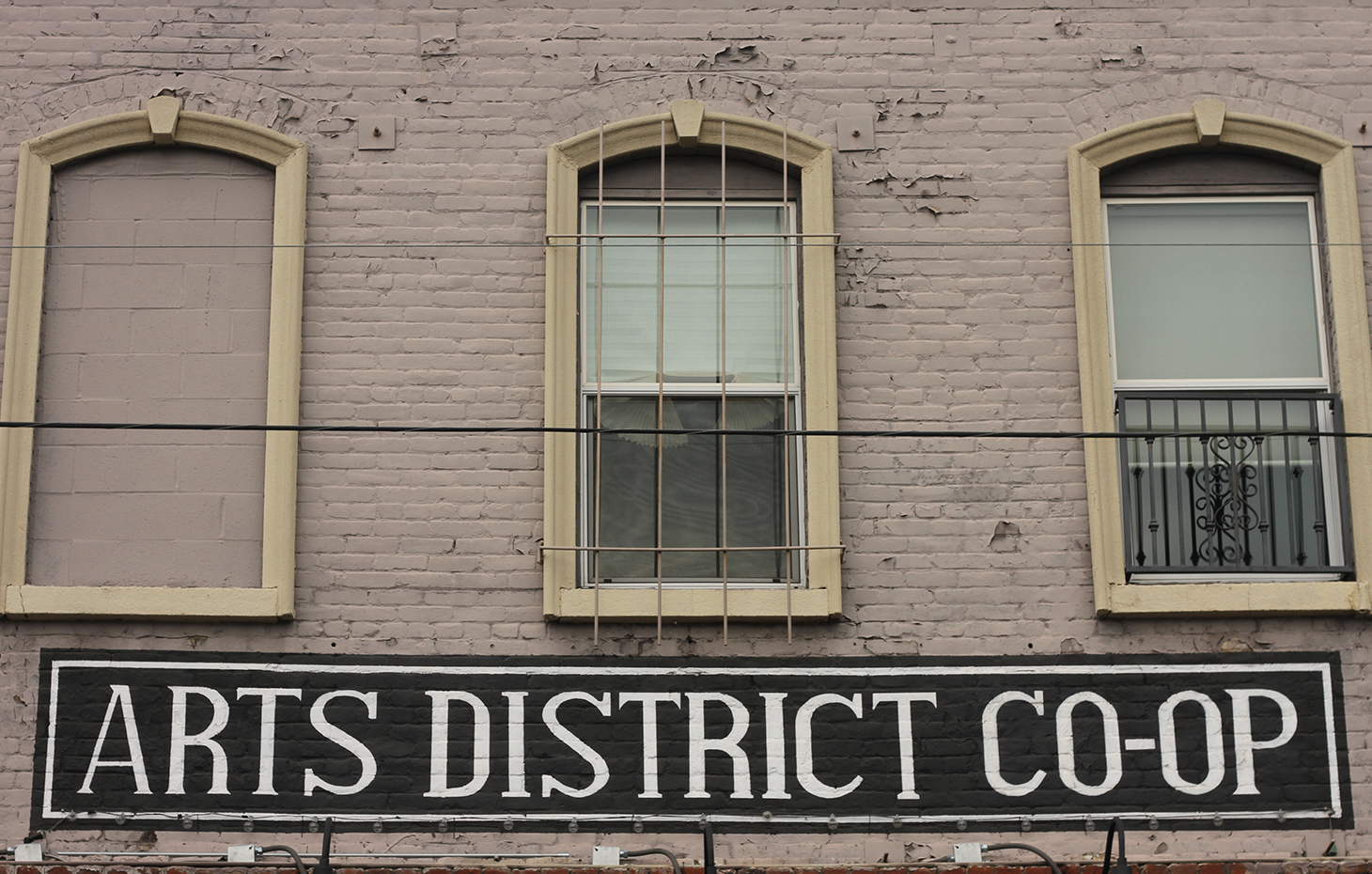 T: How do you think the pandemic has affected the future of cities and communities?

RP: The pandemic was (and is) difficult for all of us. It was abundantly clear that not all communities experienced it the same way, and that many of our low income communities of color had more of a disproportionate impact, particularly economically.

Early in the pandemic lockdown period, there were news articles about how much cleaner the air was because fewer people drove. There were articles about the ‘bike-boom,’ meaning more people than ever were buying bikes and bikes were sold out in many stores. We saw more people walking in their neighborhoods, more people riding their bikes, more people enjoying the outdoors. We saw an increase in attention to mental health and well being. We saw outdoor dining become a viable and desired dining experience.

Many of the things I just mentioned, to me, have a common thread– connection with our urban environment. I hope that some of the positive aspects of what we did during the pandemic continues post-pandemic.

T:What do you imagine a car-free Los Angeles looks like?

RP: How can we get to that future sooner rather than later? In the future, I’m hopeful that we’ll have a city with a system of car-free streets and that some stretches of some of our most iconic streets will become car-free... Not simply because we don’t want cars on them, but because car-free streets are just as viable for our daily needs as the streets we use today for cars. For some perspective, when you experience CicLAvia, it takes about 20 minutes to travel an eight mile route via bike (at a casual pace). I’d imagine on a busy weekday, taking that same route in a car would be much longer.

T: CicLAvia is the biggest open streets event in the US. What do you think it is about CicLAvia specifically that makes it special?

The CicLAvia story and experience, to me, is a story about what makes LA such a special and dynamic place. We are one of the most diverse cities in the world. We’re a city of more than 120 distinct neighborhoods such as Wilmington, South LA, Silverlake, Pacoima, Venice, Mid City, Hollywood, Chinatown, Arts District, etc. What CicLAviahas done is buildthe experience aroundneighborhoods and celebrate the diversity of our people and culture. We are all experiencing the same thing…together! It doesn’t matter who you are or where you come from…the CicLAvia experience is about the collective connection to our built and social environment. 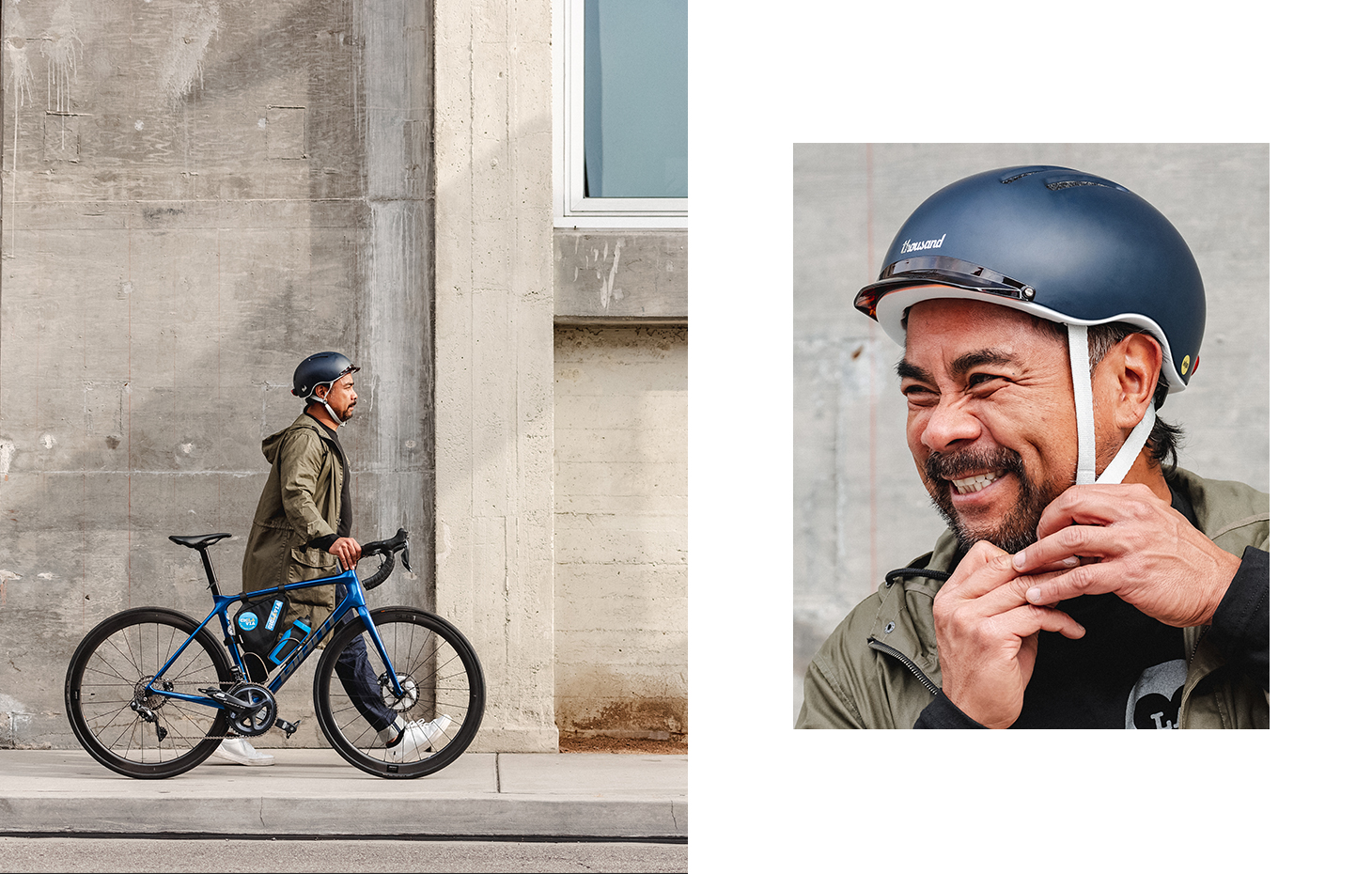 RP: I’ve been to every CicLAvia open streets event since the beginning. All 38, and it’s hard to choose afavorite because each is special to me. But the very first CicLAva on 10/10/10 demonstrated the possibilities of what CicLAvia can be…so perhaps that would be the most memorable for me.

T:  What’s next for you and for CicLAvia?

RP:I see the future of CicLAvia to be a bright one. We will be producing more events per calendar year than ever before - new routes and some of the old routes as well. CicLAvia, to me, is so important, especially as we transition out of the pandemic, because it’s a space and place where we reconnect with each other as a people and as a community.